An overwhelming majority of investors and lenders have an overall positive view of U.S. commercial real estate market conditions, even in the face of cascading world events such as China’s economic slowdown, Britain’s vote to leave the European Union, sharply lower oil prices and volatile world financial markets, according to an annual survey and report by national law firm Akerman LLP.

Based on 189 interviews with top U.S. real estate executives completed last April, 92% said they had little or no change in their outlook from 2015, during what turned out to be record year for commercial property transaction volume, according to the seventh annual Akerman U.S. Real Estate Sector Report.

While survey respondents also voiced expectations of moderating transaction activity and lower investor risk tolerance as the 6-year-old recovery winds down, many commented that they view such a slowdown a sign of a healthy market correction.

“The talk about a recession is more based on the extended run of the economy since the last recession, rather than any real strong market indicators that would point heavily in that direction,” one market participant said in summarizing the bullish case.

Investors will pivot from pursuing highest yields to preserving capital, with many already starting to prune their portfolios and pursue longer-term investments, Akerman said in the report.

“But the slowdown we’re already starting to see isn’t a reaction to fear. Rather, it is evidence of disciplined and responsible growth at work.” 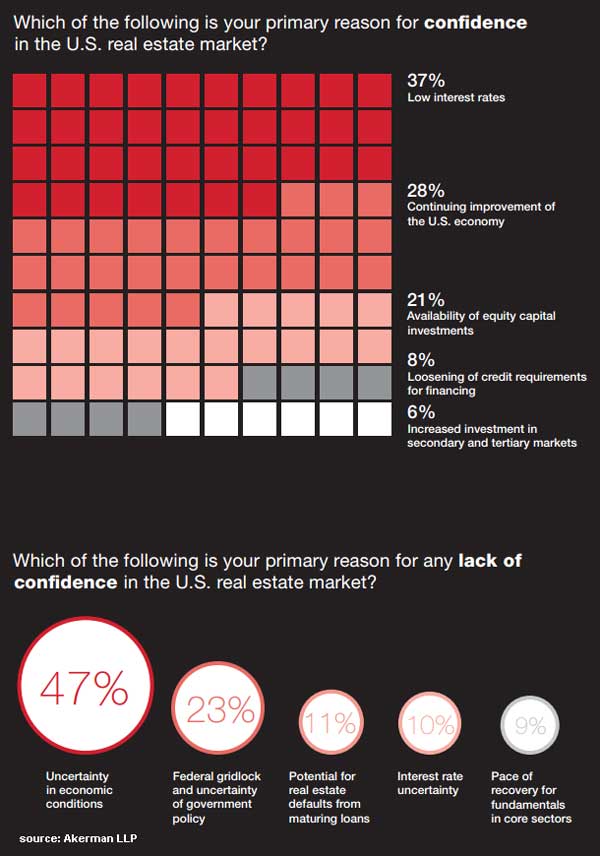 As strong fundamentals have contributed to continuing solid market performance in 2016, about 37% of respondents cited low interest rates as a primary reason for their optimism, while 28% cited ongoing improvements in the U.S. economy, with GDP growth of up to 2.8% expected for 2016.

Nearly half of respondents believe the unemployment rate will remain steady, keeping money in consumers’ pockets, and a large majority, 87%, felt that the 10-year U.S. Treasury yield would remain within 2% to 3% by year end.

Other findings from the survey include: