HomeBlogCash Accounts for 26 Percent of Commercial Transactions in REALTOR® Markets

HomeBlogCash Accounts for 26 Percent of Commercial Transactions in REALTOR® Markets

Cash Accounts for 26 Percent of Commercial Transactions in REALTOR® Markets

Commercial real estate investment trends were positive in 2015, with sales of large cap CRE transactions—over $2.5M—totaling $543 billion, based on Real Capital Analytics (RCA) data.  However, in the first quarter 2016 sales volume dropped 20 percent on a yearly basis, to $111 billion. Part of the decline was due to large portfolio transactions in the first quarter of 2015, which were absent this year.

In contrast to the large cap transactions reported by RCA, commercial REALTORS® managed transactions averaging less than $2.5 million per deal, frequently located in secondary and tertiary markets.  The Commercial Real Estate Lending Trends 2016 shines the spotlight on this significant segment of the economy.

Based on National Association of REALTORS® (NAR) data for the small cap CRE markets, sales rose 8.5 percent year-over-year during the first quarter of this year. The average sale transaction price totaled $1.1 million during the quarter. With inventory shortage continuing as a main concern, prices in small cap CRE markets rose a more moderate 5.1 percent year-over-year during the period. Average capitalization rates declined to an average 7.2 percent across all property types, a 60 basis point compression on a yearly basis.

However, in a reversal of the trend, lending conditions tightened in REALTORS®’ markets, with 33 percent of NAR members reporting tightening lending conditions, a noticeable increase from the prior year’s 23 percent.  At the same time, the percentage of members who reported that lending eased dropped from 42 percent in 2015 to 31 percent in 2016.

In addition, for 26 percent of members, the average transaction’s loan-to-value (LTV) was 70 percent or lower, with 48 percent of total deals posting LTVs of 75 percent and above.  Just as importantly, cash deals comprised 26 percent of all transactions. While the figure represents a decline from prior years, it remained a significant component of small cap markets’ financing. 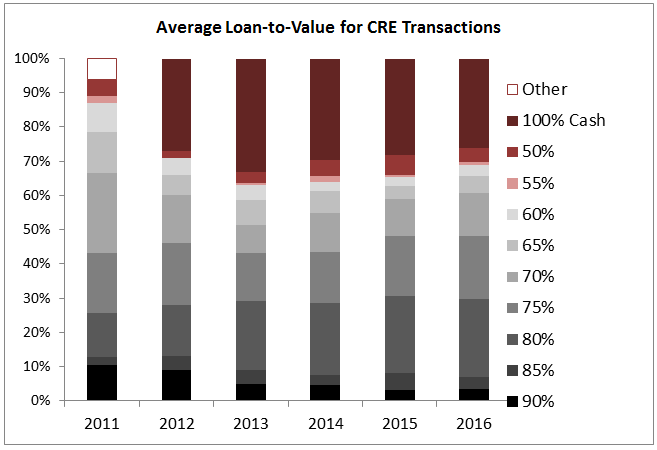