The majority of Americans still value homeownership, but millennials face major challenges in realizing this dream, nearly a decade after the subprime crisis.

Homeownership in America has taken a beating in the past few years. Eight years after the subprime crisis, homeownership remains at its lowest level in 20 years, at just over 63 percent. Does this mean the end of the American Dream of owning a home?

At first glance, the answer is no. New research from ReportLinker shows that for 80 percent of Americans homeownership remains the best investment a person can make. 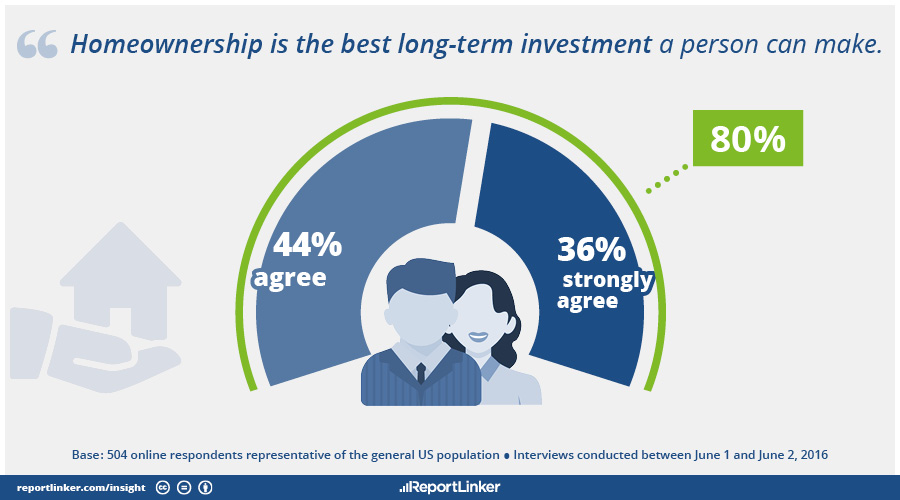 According to the same survey, owning a home is still the number-one, long-term financial priority for nearly 43 percent of Americans, ahead of ensuring a comfortable retirement, paying for their children’s education and leaving an inheritance. 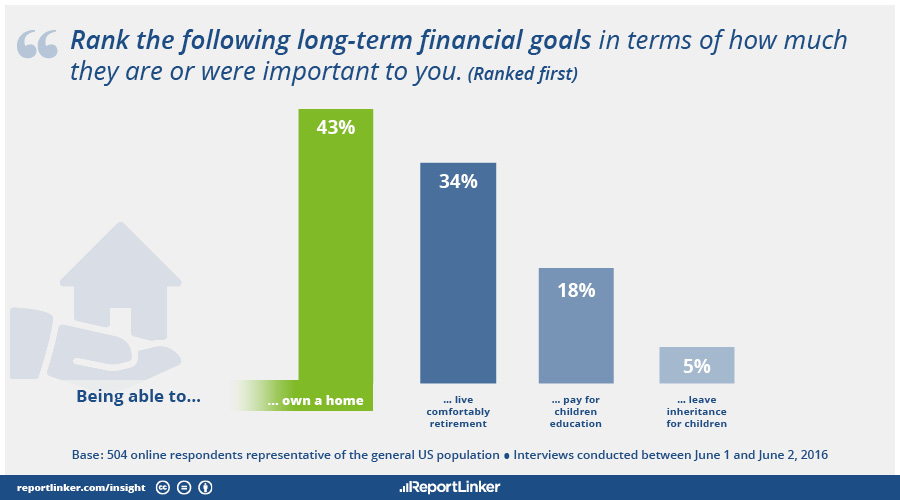 2015 report by Gallup corroborates these figures, showing that real estate leads four others choices as the best long term investment.

The problem may stem from the reluctance of young Americans to form a household, one of the main drivers of homeownership. During these economic hard times, the share of U.S. households with more than three generations under the same roof rose significantly, and has remained high. According to the U.S. Census Bureau’s Housing Vacancy Survey, growth in the number of household averaged just 625,000 annually in 2007-2013, compared to 1.5 million in 2015. But does the fact that this decline persists at a time when mortgage rates are at their lowest in 40 years indicate a change in the way Americans view home ownership?

But the picture becomes more nuanced when one looks at the importance that Americans assign to homeownership. For the general population, it is ranked in third place behind getting married and achieving educational aims in terms of life achievements in the ReportLinker’s survey. This may indicate a disconnect between the dream of owning a home and the reality of achieving it. 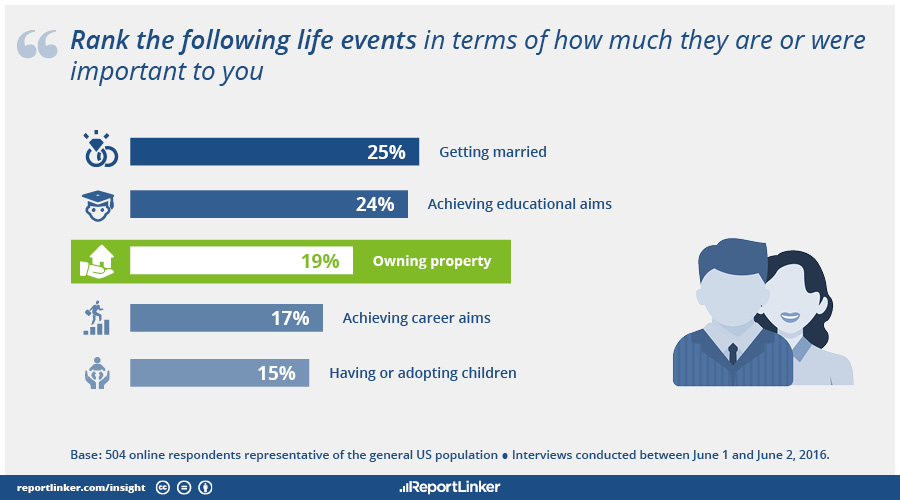 A closer look at the numbers shows that this disconnect is felt hardest among millennials. The slowdown in homeownership over the past several years has corresponded with the coming of age of the millennials (born 1985-2004). Compared to the general population, only 44 percent of millennials agree that homeownership is the best long-term investment, according to the recent ReportLinker research. 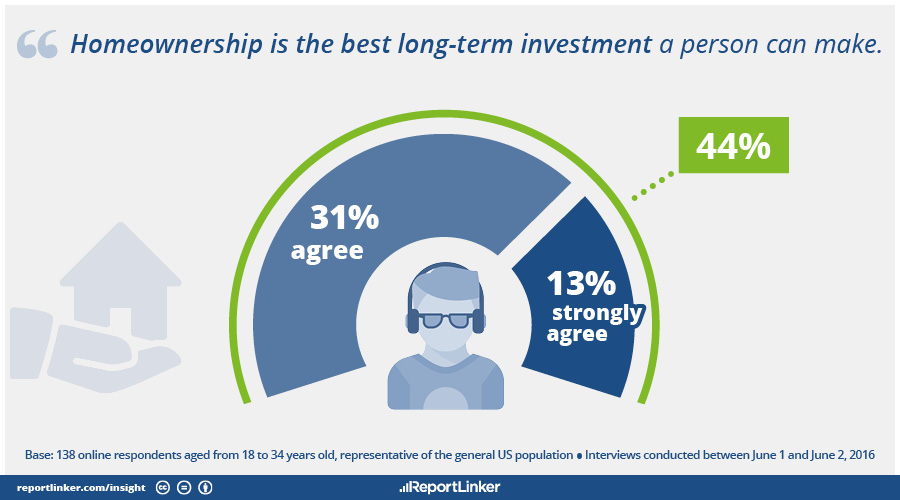 This reticence is echoed in other research, which shows that, although the millennials are the largest generation in U.S. history, they have been slow to form households, a key indicator of future homeownership. Over the past 10 years, the number of adults under age 30 has increased by roughly 5 million but the number of households formed in that age group has risen by just 200,000.

Moreover, homeownership has slipped to fourth place in the list of life achievements, coming after attaining educational and career aims and getting married, in the ReportLinker study. 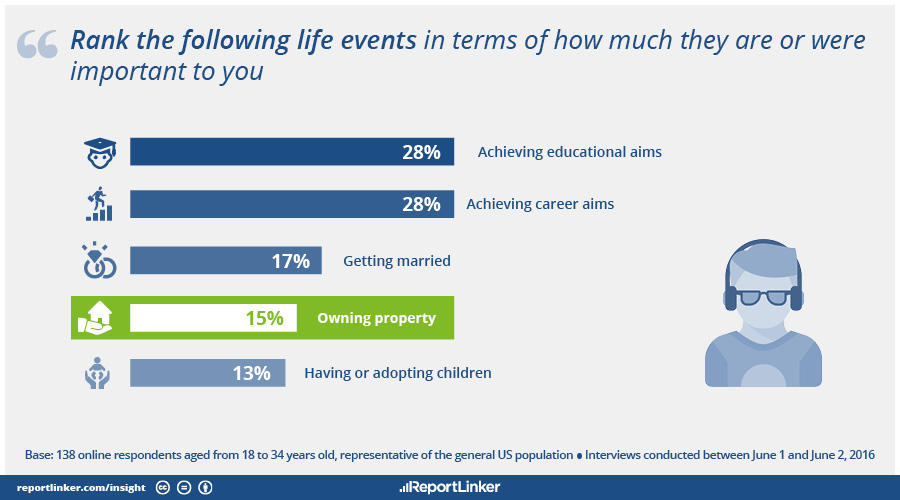 Gen Y against the odds

These numbers suggest that, in an era of stagnant incomes and wage inequality, millennials put homeownership on hold while they worked to first ensure their financial security through education and career development.

They’ve had to do it in an era of rising wage inequality and stagnation. The decision to form a household is closely linked to income, as the “State of the Nation’s Housing 2016” report released by Harvard University’s Joint Center for Housing Studies shows. For example, households earning under $25,000 annually—the ones that face the biggest financial hurdle to buying a home—were the fastest-growing segment in 2005-2015 and represented 44 percent of America’s net growth in households.

When it comes to wage levels, the picture has been similarly morose. Today, with most measures of the labor market signaling full employment in the U.S., wage growth has remained weak. Average wage growth has fluctuated around 2 percent, unadjusted for inflation, between 2002 and 2015, according to a study by the Federal Reserve Bank of San Francisco.

While millennials may have borne the brunt of the aftershock of the subprime crisis, it looks like homeownership in this segment is poised to rebound. According to ReportLinker’s survey, being able to own property still remains the top priority for millennials, with 46 percent saying it was their top-ranked long-term financial goal (compared to 43 percent for the general population), which indicates pent-up demand.

Moreover, nearly a decade has gone by since the subprime crisis and millennials aren’t getting any younger. As they age, they are more likely to form households, the precursor to homeownership. According to the Joint Center for Housing Studies report, millennials are expected to form well over 2 million new households each year on average in the years to come, raising their numbers from 16 million in 2015 to a projected 40 million in 2025.

Therefore, it looks like the reports of the death of America’s love affair with homeownership have been greatly exaggerated. And it’s the millennial generation who are coming to the rescue. Hardened by years of lower incomes, wage inequality, living with mom and dad, and renting, they are finally entering the market with big dreams and a clear head.