Prologis CEO Hamid Moghadam: “The Last Six Months Have Been the Best in Our Company’s History. Class A Market is Where the Action Is.”

Prologis, the world’s largest developer and owner of industrial real estate, reported the first six months of 2016 were the strongest in its company’s history as moderate levels of new supply paired with a strong appetite by e-commerce and other companies created the tightest market for tenants since the first internet boom of the early 2000s.

The San Francisco company owns or has interests in 3,347 buildings totaling 666 million square feet of property in 20 countries, including nearly 380 million square feet in the US. As such, the publicly traded REIT serves as a bellwether stock for the global warehouse and logistics market.

The REIT’s same-store net operating income increased 6.1% in the second quarter, securing an average 17.8% rent increase at lease expirations while delivering $621 million in new projects. Prologis had more than $3.7 billion in cash liquidity, its highest on record.

“All in all, the last six months have been the best in our company’s history,” said Hamid Moghadam, chairman and CEO of San Francisco-based Prologis (NYSE:PLD). “E-commerce and supply chain reconfiguration continue as big drivers of demand for our product. The Class A market is where the action is.”

CoStar and other CRE services firms, including CBRE Group, Inc. and JLL, noted the increasingly limited availability of U.S. industrial space at midyear as online sellers, third-party logistics firms, food and beverage and consumer goods firms scoop up newly constructed bulk warehouses and other industrial buildings as fast as they are built.

Even though developers added 158 million square feet of new warehouse/distribution space over the past 12 months, the overall vacancy rate for industrial property continued to inch down to 5.5% as of June 30 of this year.

According to a preliminary analysis by CoStar of midyear logistics and industrial property leasing data, that’s nearly 2 percentage points lower than the 2004-2007 expansion cycle, and within a few basis points of the lowest vacancy rate for industrial property since the Internet-driven demand boom of the late 1990s and early 2000s.

CBRE said it expects the global economy will continue to sustain demand for industrial space.

“While we’ve had some shocks to the global economy, the U.S. economy still is moving along at a slow and steady space and that will sustain industrial demand,” said Jeffrey Havsy, CBRE chief economist for the Americas. “Retail sales have been above expectations, posting pretty strong gains in April and May. That will help both the retail and industrial sectors.”

More than 210.5 million square feet of industrial space was absorbed by tenants over the last year, according to CoStar. The nearly 46.9 million square feet of net absorption in the second quarter, while down just under 10% from a year earlier, remains consistent with the average pace of demand growth throughout the long expansion, said CoStar Senior Real Estate Economist Shaw Lupton, in a preview of the company’s midyear industrial market review and forecast webinar scheduled for July 28.

Editor’s Note: For expert analysis of commercial property markets, CoStar subscribers can register for CoStar’s Q2 State of the CRE Market 2016 Review & Forecast webinars for the office (7/21), industrial (7/28), retail (8/4) and apartment (8/11) sectors by logging on and clicking the Knowledge Center tab.

“On balance, we expect the remainder of 2016 to produce solid results for logistics and light industrial owners, driven by healthy real estate fundamentals and continued, albeit gradual, economic expansion,” Lupton said.

Spec Rises, but ‘Developer Discipline’ is Not an Oxymoron’

While the bulk of new construction consists of largescale build-to-suit projects for e-commerce giants such as Amazon, developers also increased speculative construction nearly 13.5% in the second quarter, with 36.3% of the new space preleased, more than double the preleasing rate in fourth-quarter 2015, according to JLL Research.

“I’ve been doing this for over 30 years and I have never seen an environment where customers have been as willing to share with us their strategic plans for growth, and asking us to build more product,” Prologis’ Moghadam said. “They used to play their cards pretty close to their vests. (But now) they’re asking us to build more spec product.”

What’s more, Prologis executives said they were surprised that the ongoing demand has not triggered the usual over-response from developers. 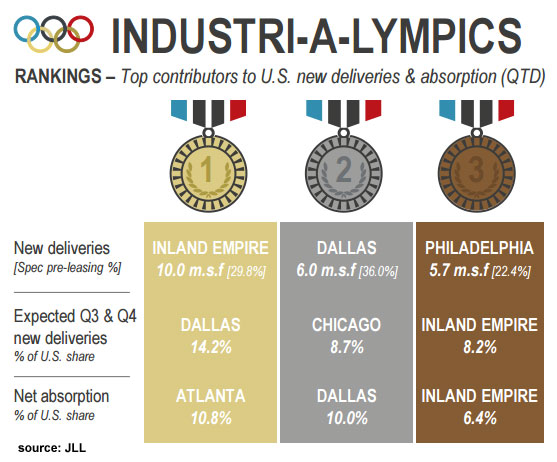 “Frankly, I haven’t seen this happen before in my career – markets got close to an overbuilding situation or maybe a little over the line, and they’ve corrected,” said Gene Reilly, CEO for the Americas at Prologis. “We’ve got to watch this every day. But we continue to be very pleased with the overall discipline.”

Reilly said that when U.S. markets reach supply/demand balance, expected sometime in 2017, vacancy rates will be at all-time lows, with plenty of room for landlords to push rents.

“I’m probably slightly more bullish than I had been in the past in the U.S.,” Reilly said.

The magnitude of ramped-up development over the past two years has been lower than expected, despite strong demand, said John Guinee, REIT analyst with Stifel Nicolaus & Co. in a recent bullish report on the outlook for industrial REITs.

“Almost all markets have available land controlled by developers,” Guinee said. “Their decision to go spec rather than wait for a build-to-suit is the critical variable, and the statistics indicate that ‘developer discipline’ is not an oxymoron.”

Southern California’s Inland Empire assumed its customary position as the top U.S. construction market for industrial space with 10 million square feet added in the second quarter, nearly 30% of which was preleased.

Moghadam said global events such as Britain’s withdrawal from the EU pose the greatest risk to worldwide demand for industrial real estate, but so far, the impact of the Brexit on Prologis operations has been minimal.

“We’re confident in the resilience of the logistics real estate business, but we remain vigilant and on the lookout for any signs of trouble,” he said. “Elsewhere around the globe, market conditions remain strong and steady. Overall, the supply and demand picture is in great shape, with all time low vacancy rates. Demand is driven by steady growth in consumption, e-commerce and supply chain modernization.”