By Lorraine Woellert; reposted with permission of Redfin.

San Francisco home prices rose 2 percent in June from a year earlier, to a median $1.25 million. Sales in the city fell 6.9 percent, the sixth year-over-year slowdown. 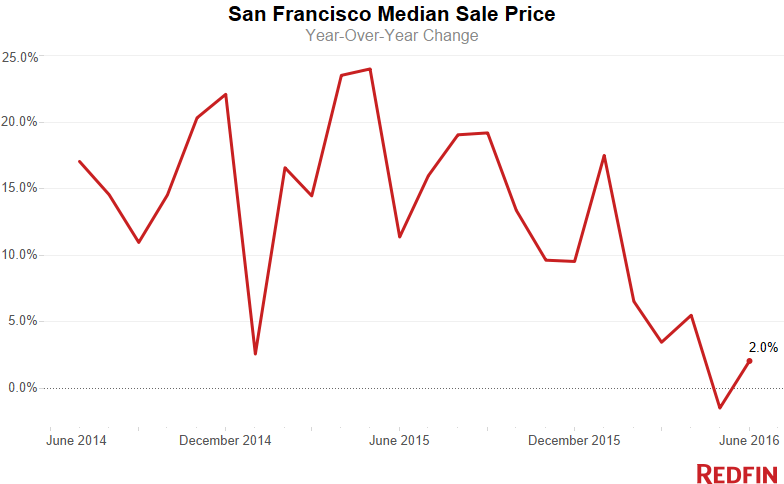 Price growth has slowed this year after four years of double-digit inflation, which has sellers rushing into the market. The supply of homes for sale jumped 77.4 percent. Condo owners in particular were active in June, causing inventory of those units to more than double from the same time last year. Single-family inventory was up 37.4 percent.

“We have a lot of folks who are just trying to take advantage of what they perceive as the top of the market,” Redfin agent Mark Colwell said. Prices might be peaking for condos, he said, but not for single-family homes. 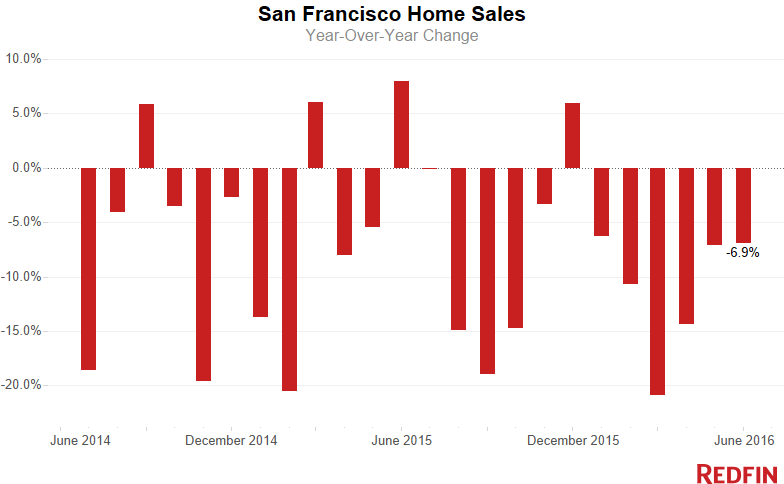 The city had more than 980 homes listed for sale in June, compared to 553 in June 2015. The number of new for-sale signs planted in June was up 8.5 percent, the sixth month of year-over-year growth.

Although inventory has improved, it hasn’t caught up with demand, and buyers remain discouraged by high prices and a lack of choice. Less than 67 percent of homes sold for more than asking price, down 10 percent from a year ago. It was the third-straight month of year-over-year declines.

Twin Peaks had only three home sales, but all went for more than asking price, pushing the neighborhood’s median price to $2.1 million — the city’s highest.

That contrasted with other high-end neighborhoods in the city, where fewer sellers were able to command as much money as they wanted. In the Financial District, Nob Hill, Mission Bay, Rincon Hill and other communities where a typical home sold for more than $1.5 million, sellers had to compromise as fewer houses fetched more than asking price.

In Nob Hill, about one in three homes sold above list price — a 37 percent drop from a year ago. In the Financial District, it was fewer than one in seven, which is a drop of nearly 29 percent.

The Tenderloin continued its streak as the city’s most-affordable community, with a median sale price of $535,000 based on five sales.

NOTE: Not all neighborhoods are listed, but totals for San Francisco encompass the entire city.  Data is based on listing information and might not reflect all real estate activity in the market. Neighborhood-specific data is measured over a three-month span that ended June 30. Inventory measures listings active as of June 30.

See Redfin’s data center to find out what’s happening in other cities.