Spirit Realty Capital has selected Jackson Hsieh to serve as the firm’s president and COO. The 25-year industry veteran will transition to Spirit’s corporate offices in Dallas after serving as managing director and vice chairman of investment banking for Morgan Stanley.

Prior to his time at Morgan Stanley, Hsieh oversaw a worldwide team as vice chairman and co-global head of the real estate investment banking group at UBS. Hsieh has served as senior lead banker on more than $285 billion of real estate and lodging transactions.

Richard J. Lieb has been appointed to the board of directors of AvalonBay Communities, a real estate investment trust that specializes in the acquisition and development of multifamily properties across the U.S.

Lieb currently serves as a senior advisor with New York City-based investment bank Greenhill Advisors, a firm Lieb has been with since 2005. He also served as Greenhill’s CFO from 2008 to 2012 and as a member of its management committee until 2015. Prior to Greenhill, Lieb spent more than 20 years with Goldman Sachs where he led its real estate investment banking group.

CoStar’s People of Note is published each Friday covering the latest commercial real estate executive level promotions and new hires.
Click on the headline of each article to jump to full coverage.
Follow the news on Twitter @TheCoStarGroup and @JSumner2.
Send new executive hires and promotion announcements to news@costar.com. 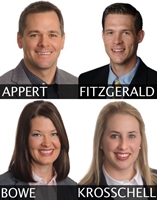 Crosland Southeast has selected Barry James to join the firm’s five original founders as a partner.

James originally joined the Charlotte-based Southeast development company in 2012. During his tenure with the firm, James has handled project management and development for some of Crosland’s projects including the 90-acre Waverly development in Charlotte that features 250,000 square feet of retail, two six-story office buildings, two medical office buildings, 375 apartments and 150 single-family homes and townhomes.

With more than two decades of multifamily development, operations and brokerage experience, Ballard most recently served as senior managing director with ARA Newmark, where he founded the firm’s South Florida Land Division and served as lead broker on transactions representing nearly 4,000 units. Before that Ballard was a founding partner and president of TM Real Estate Group and a senior project director at The Related Group of Florida.

Jeff Koerperick has joined Vestar as an asset manager in the firm’s Phoenix, AZ office. Koerperick will oversee a portfolio of assets owned through joint ventures for the privately-held real estate company that acquires and manages retail and entertainment destinations.

Koerperick previously held several positions during his 10 years at Spirit Realty Capital, most recently as vice president of asset management, managing a $2.5 billion portfolio of commercial real estate located throughout the United States.

Konstantopoulos spent 15 years with BMO Capital Markets, most recently as head of investment and corporate banking, before becoming a managing partner with Brookfield Financial. Before that he was with Ernst & Young.

Follow the news on Twitter @TheCoStarGroup and @JSumner2.
Check out last week’s edition of People of Note.