Spending on commercial property development is expected to increase again next year and continue to accelerate through at least 2018, according to a pair of new reports out this week from NAIOP and the American Institute of Architects.

In a separate report released Wednesday, the American Institute of Architects reported that architecture billings, considered a leading indicator of hard construction spending, increased again in June for the fifth consecutive month. The Architecture Billings Index (ABI) reflects a surge in expected construction, driven by the strongest demand for residential projects in two years, according to AIA Chief Economist Kermit Baker.

Meanwhile, the GMU economists who authored the NAIOP report said the slow ramp-up in construction levels has had a huge benefit.

“Some of the projects that would have been started this year will get pushed into 2016 because of some soft spots in the economy earlier in the year, and that will result in a race to the top next year,” Fuller told CoStar. “Construction probably won’t peak until close to the end of the decade, because it’s been such a long and tortuous process of acceleration. But it has extended the overall economy’s vitality.” 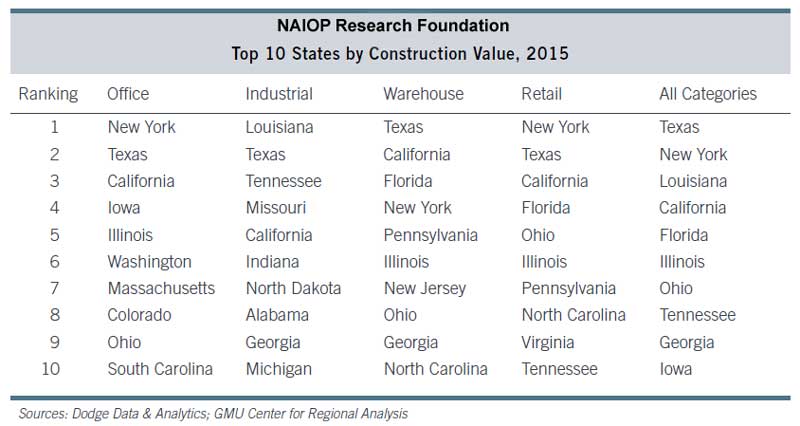 NAIOP’s report includes a state-by-state breakdown of hard construction values and its economic “multiplier effect” on state and local economies. The 10 states with the largest construction values, totaling $51.4 billion, accounted for 63.4% of all construction expenditures in the U.S., according to the NAIOP report.

Not surprisingly the biggest states, New York, Texas and California, led the nation in office construction value in 2015, with Iowa and Illinois following at a distant fourth and fifth place. Texas, California, Florida, New York and Pennsylvania secured top ranking for warehouse construction.

Iowa emerged as something of a sleeper in NAIOP’s U.S. construction rankings in recent years, with oil pipeline and other energy-related projects contributing to the state totals, along with construction of other high-value projects, such as a pair of Microsoft data centers totaling $2.1 billion data center in West Des Moines.

Warehouse construction registered a fifth strong year of spending growth in 2015, gaining 10.8% from the prior year, although overall industrial real estate construction spending declined by a steep 46% due to the energy sector downturn, as well as the slowdown in global demand for U.S. manufactured goods.